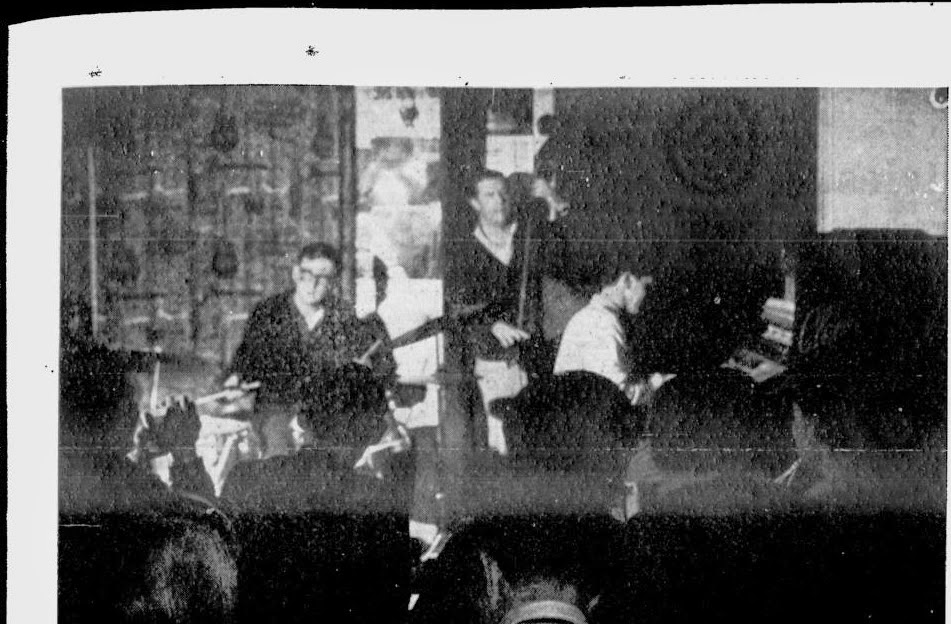 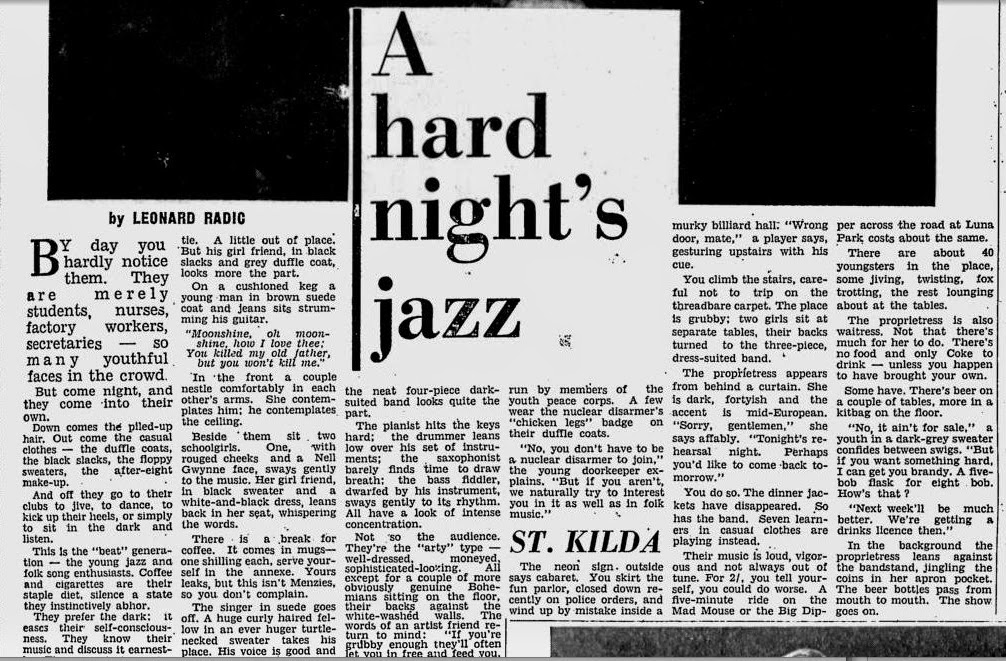 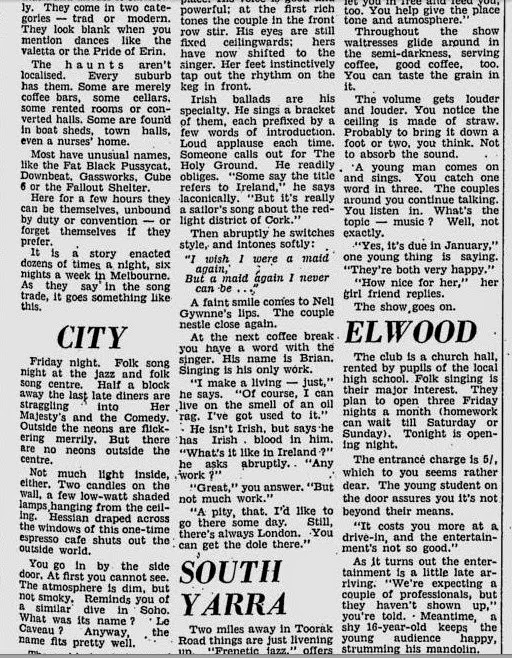 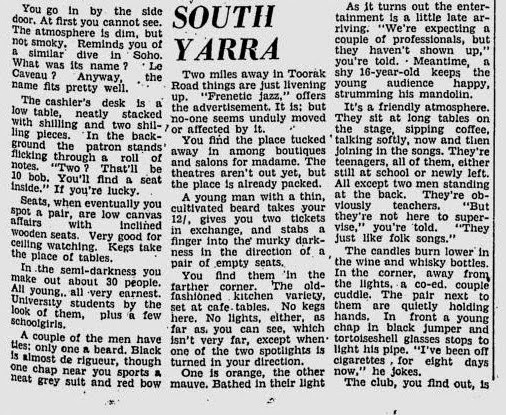 Above is an extensive article on the jazz and folk scene in Melbourne from The Age, August 19th, 1964 by Leonard Radic, focusing on the 'vibe' of the establishments and their patrons, as opposed to the music and musicians. As an insight into youth night life it provides a grasp on  the atmosphere prior to the changes in alcohol legislation, that would pave the way for the 'beer barns' of the 1970's, and the growing secularisation of youth culture. The article is also pertinent in that it was written right on the cusp of Beatlemania - the beginning of the end for folk and jazz as major youth currency. In Melbourne the switch towards 'rock' took place largely within the club sphere, as discotheques quickly replaced jazz spots and the coffee houses. Keith Glass touches on this transition in his memoirs 'A Life in Music';

"In the wake of the beat music explosion, every jazz club in Melbourne is changing it’s music policy to accommodate young hopefuls with guitars and amplifiers. As ex-jazzers (that peculiarly Melbourne cult group deserves more time/explanation than available here) we’ve already got the long hair and therefore the jump on the more established, instrumental based regular "rock" groups who see this new thing as a passing fad. Soon we are working at Stonehenge in Beaumaris, Harlem in Caulfield and Penthouse in Ormond. Mentone Rock has become Mentone Mod, Jazz Centre 44 in St. Kilda is billing R&B nights each week, ditto the Fat Black Pussycat in South Yarra and dances such as OddMod at Kew Civic Centre are raking it in for the promoters while the bands are just excited to be there."

One example of the transition between 'jazz' and 'beat' is the aforementioned Fat Black Pussycat, presumably the South Yarra venue mentioned in the article. Opening as a modern jazz venue in 1963 it provided a platform for the likes of the Brian Brown Group, The Heads (later the Bernie McGann Quartet) the Barry McKimm Trio, the Alan Lee Quintet, the Bob Bertles Quartet, and the Heinz Mendelson Quartet. Most were refugees from the Jazz Centre 44, in wake of clubs move towards trad jazz after its founder, Horst Liepolt, left for Sydney. It only lasted three years, having folding by 1966 and converting into one of Melbournes first discotheques, with a strict 'rock only' policy.

The most 'known' of the groups that played at the Pussycat was the early incarnation of The Wild Cherries, pre-Lobby Loyde. A transitional act, members Les Gilbert & Kevin Murphy were modern jazz fans with a vogueish embrace of electrified r'n'b. Gilbert describes their experience with the venue, "The Fat Black Pussycat had been a jazz venue and was run by an American guy called Ali Sugarman – very much along the lines of a New York jazz club. With declining audiences he decided to change the music to stay in business and for some reason I can’t really remember, we were asked to perform the first night of its conversion from jazz to…I struggle with finding a word for what we called our music at the time,". 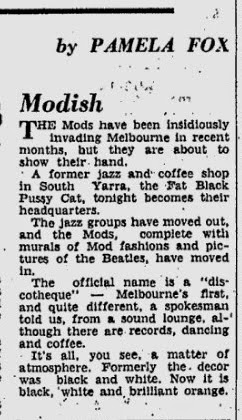 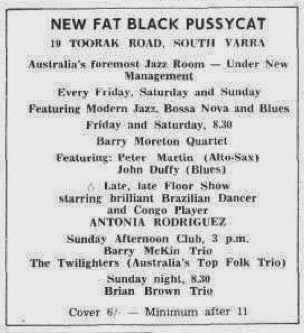 (Lot's Wife, Dec 2, 1965)
Though this gossip piece from The Age claims the venue had already moved on from jazz to mod by '64 (presumably not the jazz loving mods though) the venue would later be managed by Adrian Rawlins between 1965 and 1966, continuing to promote experimental jazz and poetry until its closure. 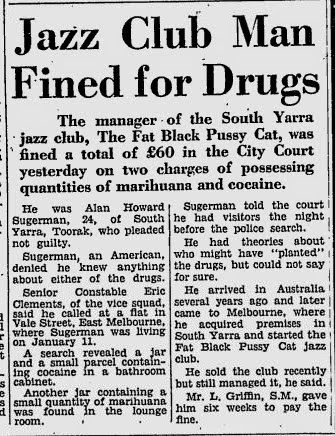 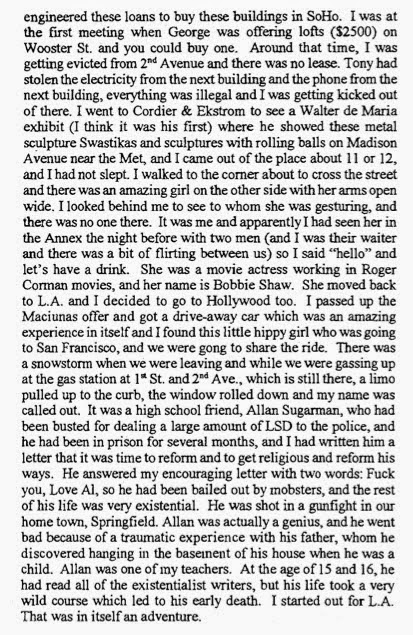 I’ve also included what information I could find on Ali Sugarman, an elusive (shadowy even?) figure in the narrative of jazz in Melbourne who came to tragic end. Like Horst Liepolt, Sugarman was another transnational influence on Melbourne cultural life in the post-war period, via the nexus of the ‘jazz club’. That he was tangentially connected with the Fluxus scene in New York is also an intriguing point, and may go someway towards explaining his willingness to promote the likes of Barry McKimm during the period they were embracing techniques influenced by John Cage and Ornette Coleman. Whilst jazz and ‘jazzers’ were the in thing I’m not sure how far towards that end of the spectrum audiences went (not very far, and would explain the change in booking policy) Pianist Chuck Yates provides an insight into his 'New yoik' ways, "The club was run by Ali Sugaman, who was later shot dead in New York. He was an incredible cat though. He was the first person I knew who would say any word in front of anybody. At that time in Melbourne nobody swore in front of women." I've read elsewhere that swearing in front of a 'blokes' 'girl' at that time in Australia was enough to cause a fist fight.... Perhaps The Fat Black Pussycat could be thought of as a small slice of New York in Toorak, perhaps?

In wider terms the shift towards rock proved disastrous in terms of commercial and social infrastructure for modern jazz in Melbourne, unlike folk and trad jazz, which both managed to sustain support (see W & G, East Recording Company, Score Records, Swaggie Records, The Seekers, Trevor Lucas, Red Onion Jazz Band, Frank Traynor etc. etc. ) The changes in taste in Melbourne away from jazz saw kept it absent from the official record. Unlike Sydney, which had the El Rocco and the major record labels such as Columbia and EMI, Melbourne had no venues, or labels - independent or major. Presumably this wasn't helped by the fact that artists such as Brown, McGann and McKimm, like their counterparts in Sydney, were at the height of their explorations in avant-garde and the 'new thing' (I say presumably as there are few available recordings to consult) That there  no one had a little money or interest in running something along the lines of ESP Disk is a shame as there was enough avant-garde activity during the period to sustain something. The only supporting documentation of artists in the 1960's period that I know of are two tracks by the Bernie McGann Quartet tracks on the Australia Jazz '67 compilation, the two EP's by the Alan Lee Quartet & Quintet from '61 and '63, the Max Reed Trio's EP from 1963, some of the tracks on Jim Minchin's 'Move 2 Mix' album, and there is one or two 'modern' style tunes on a live LP by Len Barnards Modern Jazz Group with Keith Hounslow on W&G from the late 60's, though mixed in with more 'trad' styles. I've read mention of a release by the Brian Brown Quartert, "Live in Tasmania", from 1969, but can't find any evidence that it actually exists. There are also archival recordings of McKimm along with Robert Rooney and Syd Clayton available on the Artefacts of Australian Experimental Music 1930 - 1973 compilation.

The lack of venues or audience interest saw a real retreat from experimental music for several years in Melbourne, until the Carlton scene swung into life, and the establishment of the Victorian Jazz Club in 1969 provided some space for artists like Alan Lee and Brian Brown, though McKimm etc. had moved away from jazz into 'new music' circles, such as the International Society for Contemporary Music, and into the nascent experimental theatre scene around La Mama.
Posted by jarrodzlatic at 17:28

My name is Rory O'Brien, I am a student studying Jazz. I am currenty in Prague but study mainly in Canberra. I am writing an essay on Jazz's role in Australian youth culture, past and present. I would love to get into contact with you about this, I am especially interested in the character of Ali Sugarman. Thanks, I can give you my email if you are willing to discuss with me.