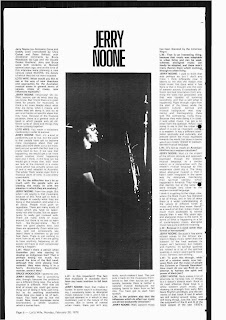 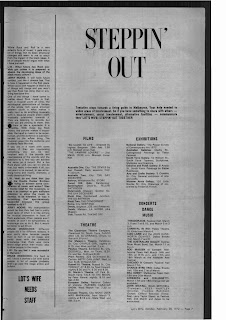 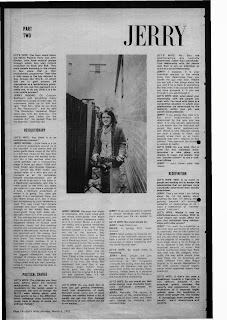 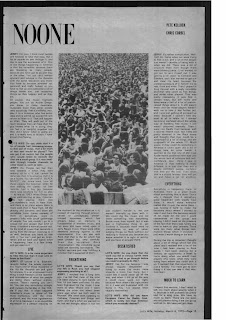 Published over two separate issues of Lots Wife, February 28th (pg. 6 - 7) & March 6  (pg. 14 - 15) 1972, this is an extended interview with Jeremy Kellock aka Jeremy Noone. He is mostly 'known' for playing saxophone with Daddy Cool and as a member of the Australian progressive group Company Caine, though he also founded NIAGGRA, one of the earlier group improvisation projects in Melbourne. The interview was conducted just after his time touring the USA with Daddy Cool and just before the debut of the NIAGGRA project at La Mama Theatre. Though Kellock has become somewhat of a footnote to the career of Ross Wilson & Ross Hannaford via Daddy Cool he was an active participant in the emerging 'underground' scene in the very late 1960's and early 1970's in Melbourne. A flexible musician with his foot in 'serious' music and 'pop' music camps he was a part of a scene that was a cross pollination of music, visual arts, theatre, performance and film makers. Much of the Carlton underground music scene has since been absorbed as the background facts to the history of Daddy Cool and Skyhooks, though this was inevitable as much of what took place was either sparsely documented (living in the moment perhaps?) or the records that managed to receive a release were only available in small quantities. 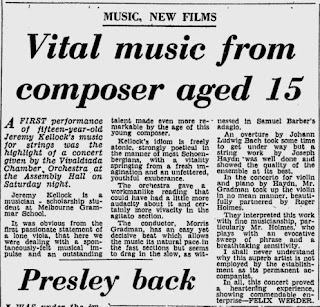 A precocious wunderkid/teenage prodigy who begun studying composition at Melbourne Grammar on a scholarship in 1966 at the age of 15,  described by Felix Werder in 1967 as "the best composer potential we have had in Australia since the days of Peter Sculthorpe," Kellock seemingly abandoned his classical excursions, pursuing his passion for jazz and rock 'n' roll. He formed a private rehearsal circle with Ken Schroder, Murray Wall, Mike Murphy, Simon Wettenhall, Ron Francis and Ian Mawson that explored "the art of improvising working on standards,bebop and the music of Lennie Tristano, Lee Konitz and Warne Marsh", concurrently he was amongst the head scene emerging around the inner city of Melbourne in Carlton and the T. F. Much Ballroom in Fitzroy, playing in the Lipp Arthur Group - an unrecorded revue group, a who's who of the Carlton scene, reputably with an affinity for Zappa, Beefheart and Archie Shepp, a collision absurdist humour and jazz rock (Zappa's influence, and a general absurdist irreverence, unfortunately tarnished many of the early Carlton groups - Skyhooks could have been a sharp, urban glam band but instead played for laughs)

Kellock was at the vanguard of 'progressive' rock in Melbourne as a member of Sons of the Vegetal Mother. An interesting combination of musicians, The Sons of The Vegetal Mother were headed by Ross Hannaford and Ross Wilson. Precocious kids themselves, with an average age of 15, their high school r'n'b group, The Pink Finks, managed four singles across 1965 - 66 , their first single, a cover of 'Louie Louie' on their own Mojo label went to #14 in the local charts.  They hooked up with NZ transplant Mike Rudd and moved onto the slightly progressive/psychedelic Party Machine, who evolved into The Sons of The Vegetal Mother, an expansive group who included in their horn section Kellock along with Simon Wettenhall, Ian Wallace, and Bruce Woodcock. Their sole release is a privately issued 7" EP to accompany their participation in The Garden Party, an art environment by Warren Knight, Ti Parks & Guy Stuart. Though reflecting the emerging Hannaford/Wilson style (take it or leave it) outre elements creep into the expansive song arrangements and the contributions of the horn section. 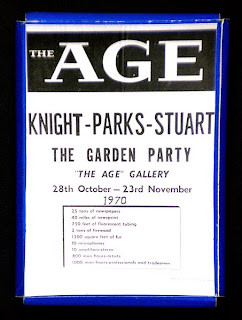 In Sydney a similar progressive scene had emerged, centered around the multimedia events of the Ubu Collective and the likes of Tully and Tamam Shud, though Melbourne ex-pat Gulliver Smith had been busy in the Sydney scene playing in psychedelically named groups such as Dr Kandys Third Eye (numerously cited as Australia's first psychedelic band) Time and the Forest Flower, and Ripped Family Marches - he moved back to Melbourne and hooked up with Kellock to form Company Caine (Co. Caine ….). The Sons of the Vegetal Mother had become subsumed by their own 'party band', their satellite project Daddy Cool more popular then their actual group and Vegetal bass player Mike Rudd moved onto Spectrum (who ended up also mostly eschewing their progressive ambitions, being swallowed up by their own party band Incredible Murtceps) Company Caine were an avowedly progressive group that combined channeled post-Zappa jazz-rock somewhat close to King Crimson. Though their early material had hints of hockey Canned Heat hijacking their debut album, A Product of A Broken Reality, combined all sorts of experimental and popular approaches - the half way between Gulliver Smiths songwriting and Kellocks wide reaching arrangements that included his free jazz inspired saxophone playing, eclectic electric piano flourishes and electronic FX gave them an edge most other Australian progressive groups lacked.

Around 1972, when the above interview was conducted he had just toured across America with Daddy Cool and had began distancing himself from the rock world. He was involved with the New Music Centre, formed by Chris Mann it included notable members such as Ron Nagorcka, and was about to debut NIAGGRA (New Improvisation Action Group for Gnostic and Rhythmic Awareness) The core of NIAGGRA were the horn section from Sons of the Vegetal Mother, (Kellock with Wettenhall, Wallace, & Woodcock) along with experimentalists Chris Mann, Dan Robinson and Steve Martin.  NIAGGRA staged weekly Monday night improvisation sessions for the next two years, open to the public at the small La Mama theatre. The one available recording (on Artefacts of Australian Experimental Music Vol. 1) displays an abstract, acoustic free improv sound typical for the early 1970's.

The particularly….uh, long winded and meaty interview touches upon some of the problems within Melbourne that would not really be rectified till 'punk' broke and an understanding that for experimental music to operate it had to be away from the 'gig'/event environment that dominated underground shows at the time, which often favoured large scale multimedia events that definitely had the hang over of the happening and the expectation of entertainment (the 'successful' experimental music evenings in Melbourne during the 1970's were all private run entities who hired out non-traditional spaces that favored a small scale, intimate environment, see the Clifton Hill Community Music Centre, The Commune, Universal Workshop Theater etc.) The interview also hints that playing in over amplified sonic environments pushed them towards wanting to return to an intimate setting that embraced silence. In 1973 he also started a modern jazz group, The Jeremy Kellock Re Boppers, that performed regular Saturday afternoon shows in a small bar down Hardware Lane. NIAGGRA eventually dissolved by 1974 with infighting and differences of vision amongst the members (like it always does) presumably it was due to a split between the jazz heads and the more experimentally inclined group members. Kellock, along with Simon Wettenhall, left for the United States in 1975 to study jazz composition with Warne Marsh and play bop.
Posted by jarrodzlatic at 16:48

Thanks for uncovering this article. In my research for the Artefacts volume 1 CD, no one seemed to know what had become of Kellock/Noone.
Other NIAGGRA recordings do exist; and are slightly more trad/tonal than the one that appeared on the Artefacts CD. All are improv based, but with more reliance on recurring motifs rather than the use of songs/standards as structures.