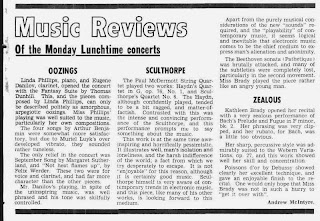 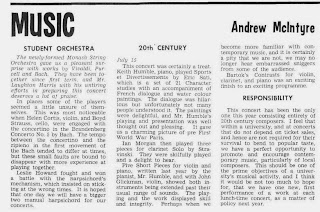 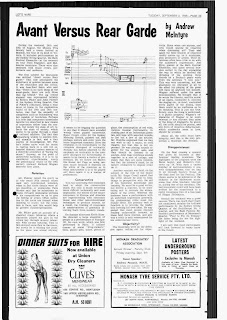 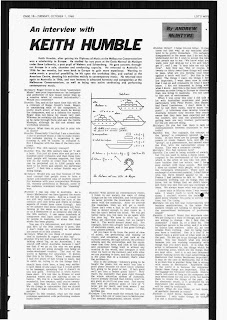 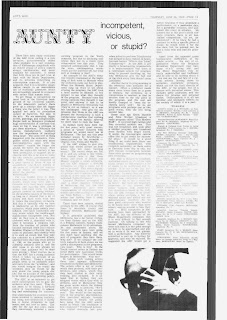 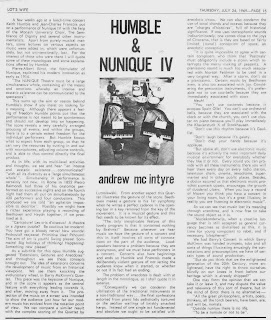 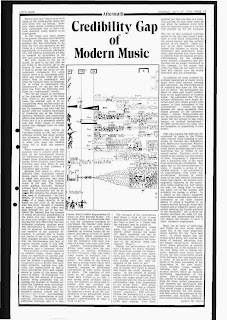 This set of articles, extracted from Lot's Wife, are from the pen of Andrew McIntyre. Between 1968 and 1971 he wrote regularly on local movements in contemporary classical and new music, reviewing the Monday lunchtime concerts at Monash University (featuring new works by Felix Werder, Peter Sculthorpe, and Keith Humble alongside Stockhausen, Messian etc.) and highlighting/railing against the lack of institutional interest and support for new music in Melbourne. Though some (most?) of these articles may be a little dry or, obscure, they provide an interesting insight into the early developments of avant-garde music in Australia.

Perhaps of most interest is the interview with Keith Humble (Oct 1, 1968, pg. 18) who was an important figure in avant-garde music in Australia. To give some brief background, it was only in 1966 that Keith Humble returned to Melbourne and formed the Society for the Private Performance of New Music, and started to push for institutional recognition of 'new music', founding the Electronic Music Studio at the Grangier Centre in the University of Melbourne (1966), and the establishment of the Music Department at Latrobe University (1974). Though avant-garde activity had been taking place in Melbourne before that, it had existed with little or no support and Humbles return, along with wider cultural changes, were important in shifting its acceptance and dissemination. Further information and sound recordings are available via Clinton Greens "Artefacts of Australian Experimental Music 1930 - 1973" (Shame File Music) It is the best (only?) introduction to this period of music in Australia.

The articles above are (in order):

Thank you again for bringing these articles to light. The review of the Nunique and ISCM concerts were particularly interesting. I wrote an article for a musicology journal on the ISCM in Melbourne a while back; it was a torrid time in Melbourne music.

Hey Clinton, thanks for the comment! I was actually going to send you a private message about these but, like many things, I forgot! If I uncover anything else of interest I'll let you know :-)